My First CONTEST! Put on your thinking caps, folks! 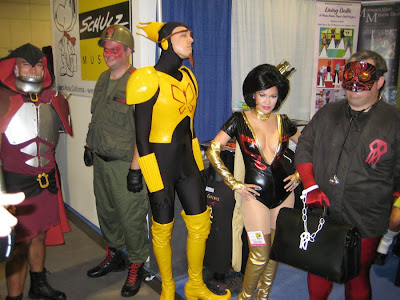 To celebrate the release of my FanVixens calendar, I'm going to have my very first blogger contest. The calendar is themed with a variety of characters. So, I want you to dress up as ANY EXISTING CHARACTER that you like. I mean ANY CHARACTER. As long as the character existed at some point in books, tv, movies, video games, etc. it's acceptable. I want to see makeup, costumes, and a bit of a back story...

How to Enter
To enter the contest you must....

Now for the meat and potatoes...PRIZES!

Over $500 in prizes will be given away for this contest! I will have 1st, 2nd, and 3rd place entries.
These prizes will include:

The list of prizes will grow if I have enough contestants, hell maybe I'll even have 4th or 5th place prizes.

Judging...
In order to keep the ruling as unbiased and sincere as possible I will have 5 different judges of different character, sex, ethnicity, and lifestyle. Each judge will rate you on a scale from 0-20. Each individual score will be anonymous. Your rank will be a score of 0-100.

Judge 1- ME. I'm an artist/photographer. I have a sick sense of humor and I love irony. I'm particularly going to pay attention to your makeup, how much effort you put into your entry, and please be aware that I'm not a fan of bad photoshop jobs, so if you're thinking of using some cheesy filters on your work...I'm not going to like it. If it's tasteful and makes sense then go for it. Let your artistic juices flow, but don't blur your images beyond recognition. Also, I'm looking for fun characters. You don't have to be an exact image of a character. I want to see you as the character.

Judge 2- My older sister. I would describe her as a more goth, dramatic version of myself. She loves all things unusual and dark. She's also a UCLA English major with an emphasis on creative writing, so story will be important to her.

Judge 3- The gay male. He'll probably be the most critical. When it comes to him, you best bring it. He's looking for makeup skill, costume, ferocity, and breaking barriers. He's into theatrics and fashion.

Judge 4- The straight, refined business man. He's a suave, intelligent, and pays a lot of attention to detail. Skin might sway him a bit, but he's an intelligent guy. He knows good work when he sees it. He's no makeup guru and he may not be familiar with many characters, so he'll probably pay more attention to the whole picture/story that you put together.

Judge 5- The fanboy. He's into comic books, video games, hot chicks, and pizza. He'll pay more attention to how true you are to a character and he'll focus on creativity and the obscurity of a character. He may also be swayed by skin, but he'll be more impressed by a great costume and attention to detail.

Remember contest ends November 6, 2009. That's over a month from now, so there will be no excuse for late entries.

Woo, this is so exciting! Now don't be scurred people. I want you to have fun with it. xoxo
Posted by Ms. Rodil aka Supervillain1 at 8:21 PM

This sounds like an amazing contest! Can't wait to see all your entries!! Right now my Henchman costume is on hold cuz of $$$ issues! LOL! But hopefully I can pull some shit together! LOL!

wow I love contests like these!! I cant wait to participate!

oooh your first contest!! how exciting!! i hope you have a lot of entries :]

I had this same contest idea for the longest time but no prizes! ahah :) I guess I'll think of another contest idea, but good luck with yours! I bet your entries are gonna be really good ^_^

hiii! im new to your blog! this is an amazing idea!

Hiya there!!!
FANTASTIC contest!! Here is my entry, it was amazing fun, thank you for holding it! Can't wait to see your entries :)

Hope you'll like it and that there will be other contestants :( anyway, thank you for holding it =D

Oh and the rest of my blog is in french, just saying!!

Hi! Great contest, pity I read about it just a couple of days ago! So here's my entry, it's super DIY but oh well, I tried =)

Good luck to Sarah, who did an AMAZING job!

Rosie, Thanks for joining the contest. =) I can't access your entry though because I'm not an invited reader of your blog...

Yah I know!! :S I'm really sorry!! My friend just told me she couldn't read my blog anymore... I realized I accidentally made it private -.- It's fixed now, everyone can see it :)

This is my entry to your contest. Hope you'll like it

heheh SORRY in the previous one i forgot the link to my entry for the contest
http://atasteofglam.blogspot.com/2009/11/supervillains-character-contest-entry-d.html

its the Joker =D

Your blog keeps getting better and better! Your older articles are not as good as newer ones you have a lot more creativity and originality now keep it up!

Good dispatch and this enter helped me alot in my college assignement. Say thank you you seeking your information.

Well I acquiesce in but I contemplate the post should secure more info then it has.